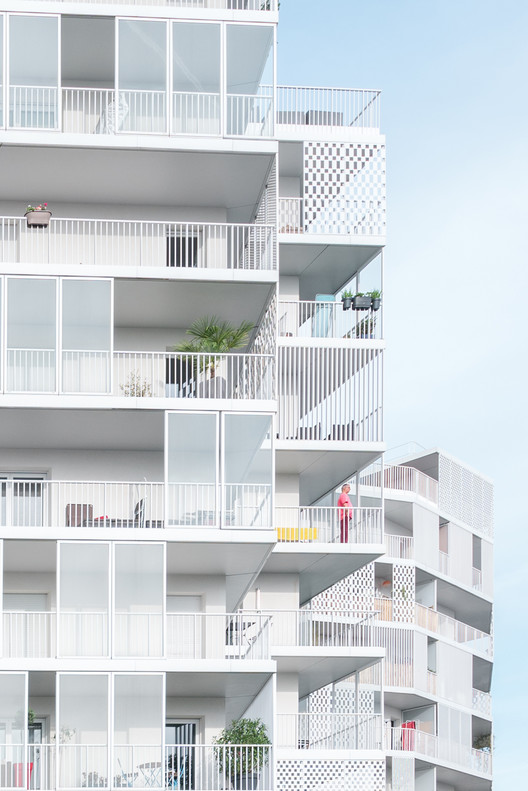 Diversity in Unity
In the history of architecture, it is rare to find examples of roads built entirely by the same architect. The ‘Rue Camille Claudel’ project primarily poses the question of scale. The trauma of the Grands Ensembles has prevented a unitary approach in architecture today. We often see urban projects divided into ‘slices’ of 50 to 60 houses under the guise of “architectural diversity.” This approach is often detrimental due as it is associated with a lack of consideration for the town and city planning. Hamonic+Masson & Associés won the Camille Claudel project in 2013 had proposed a global and unitary strategy, which incorporated architectural diversity with evident character. Here diversity is a question of form and typology and not simply style.

A Demonstration
The project is organized around seven buildings on two separate plots linked by a public road. The site has its constraints, including the local flood prevention plan, building area restrictions, required transparencies and the local urban plan. However, it also has its advantages such as unobstructed views of the Seine, the nearby park and the surrounding new and developing neighborhood. Each building has its own character but remains linked to its neighboring structures. The morphology of the buildings develops in a way that provides each apartment with multiple views of the Seine and maximum sunlight exposure. The buildings interact with one another in a way that creates collective spaces overlooking the new road.

The buildings are raised off the ground in order to allow the eye to wander between the structures and let the natural light penetrate the site. These open ground floors are connected to each other via the road, and the hallways become transparent spaces with dual aspect views. The voids between buildings and the road are landscaped in order to create a large, planted, communal garden. The extension of public space is at the heart of the system and is a concept that will create a strong link between shared spaces, the road, and the project.

One of the big questions in collective housing is that of repetition. How can we avoid this feeling in a programme of 330 apartments? (60% privately owned, and 40% social.) The apartments are stratified but must offer quality and uniqueness. We have responded to the search for identity within the collective and provided differentiation by proposing multiple, varied exterior spaces.

Furthermore, we have designed numerous typologies with the majority of apartments benefiting from a southwesterly orientation and views of the Seine. The buildings directly facing the river have been designed to give a strong signal of Metropolitan scale. The buildings are sculpted in a way that favors maximum sunlight exposure and provides views overlooking this incredible site. They are clad in metallic lace with varied motifs, which give an identity to this new neighborhood.

This detail on the facades was the opportunity to give the project an identity. In the Metropolitan skyline, the lacelike panels vary according to the time of day, the weather and the seasons. The different elements will resonate, as certain locations will absorb light while others reflect it. Architecture is condemned to be static but different staging and cinematic measures can render the buildings dynamic, lively, provocative and can also evoke multiple sensations.

Subtly playing with framework and motifs within the unity of light and luminous tints, the project gives a refined image. However, it is simply the assembling of simple materials which, when superposed and enhanced with graphics and precision, engender a poetic quality.  An atmosphere.