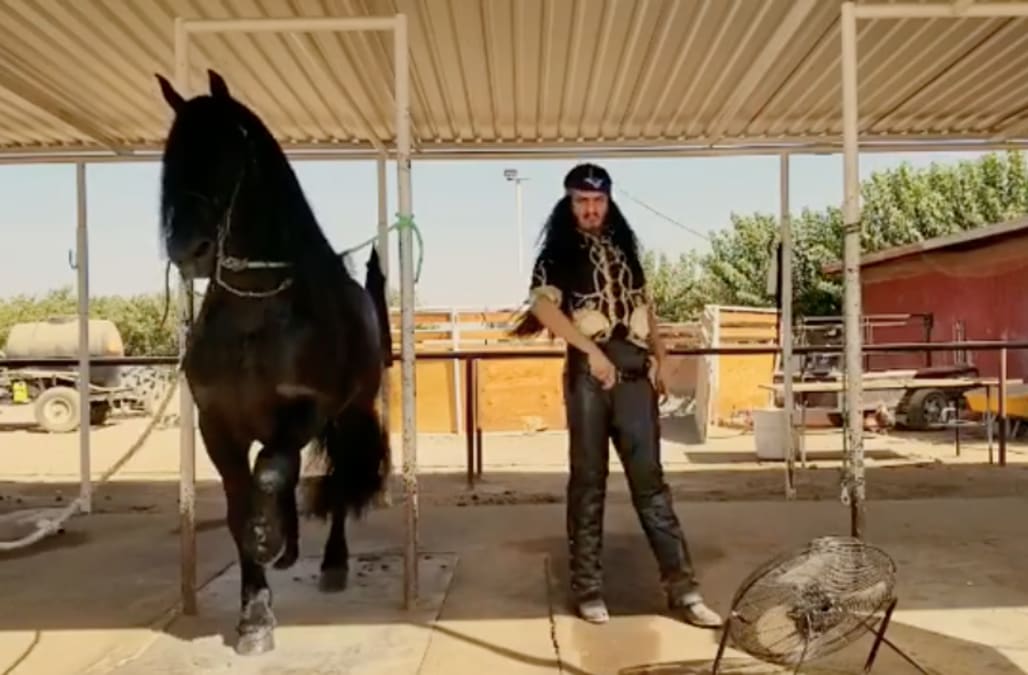 A nonbinary Mexican-born artist has gone viral on social media after paying homage to Beyoncé’s 2018 Coachella performance (otherwise known among fans as “Beychella”).

In a clip posted to their Instagram on April 4, Tenorio dances to “Everybody Mad,” a song by rapper O.T. Genasis that was featured in Beyoncé’s 2018 set and concert film “Homecoming.”

The video shows Tenorio doing choreography with a Friesian stallion named Thomas, a horse from Rancho San Juan in Delano, Calif. (where the video was shot). The pair impressively move to the beat of the music in unison.

But there isn’t just synchronicity between the duo’s movements — there’s also a visual harmony.

The horse is all black, and Tenorio is dressed in black. Moreover, Thomas’ lengthy black mane, along with Tenorio’s long black hair, both whip and whirl as the two dance.

In fact, in an interview with In The Know, Tenorio cited horses, Beyoncé and a “love for hair” as inspiration for the video. Beyoncé fans will also notice another homage to the R&B icon in the footage: the strategically placed fan used to blow Tenorio’s luscious locks for extra drama.

In addition to Beyoncé, the artist pointed out a personal inspiration for the viral clip.

“My mother Eloisa Lopez inspired me,” they told In The Know. “She has been a business owner for almost 30 years. She came to this country, like many, with dreams and she has always supported mine.”

The video, which was also shared on Twitter, has since received a lot of praise, although some people have expressed worries over the dancing horse’s well-being. Tenorio, however, was quick to shoot down any concerns.

“[I] have seen people’s concerns over the horse performing,” they told In The Know. “This is a huge part of [the culture of] Mexican artists, who incorporate the dancing horses into their performances … The horses are treated so beautifully. Sick or healthy, they are treated with such care. For this performance, we did the take four times in a span of about 15 minutes.”

Watch Tenorio and Thomas dance together to “Everybody Mad” in the video above.

If you liked this story, check out In The Know’s article on the “Full House” cast recreating a quarantine-themed version of the show’s intro.

More from In The Know:

7 easy home upgrades you can make to improve your space

The article “Mexican artist and stallion perform epic dance homage to Beychella” originally appeared on In The Know.

Architects on reopening cities in the coronavirus era