Schools are shuttered     everything is cancelled     and my body has become

the verb I guess     or jamming as it applies to me

a steady state of hysteresis

in which applied pressure     changes the ensemble     in which the structure

bounces back     but not completely 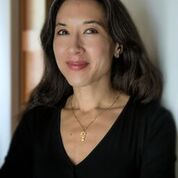 Tina Cane serves as poet laureate of Rhode Island and is the founder and director of Writers-in-the-Schools, RI, for which she works as a visiting poet. Tina is also an instructor with the writing community, Frequency Providence. Over the past twenty years, she has taught French, English, and creative writing in public and private schools throughout New York City and Rhode Island. Tina’s poems and translations have appeared in numerous journals including Spinning Jenny, Tupelo Quarterly, Cargo, Two Serious Ladies, The Literary Review, and Jubliat. Her work, The Fifth Thought, was published by Other Painters Press in 2008. She is also the author of Dear Elena: Letters for Elena Ferrante (Skillman Ave. Press, 2016), Once More With Feeling (Veliz Books, 2017) and Body of Work ( Veliz Books, 2019). Tina was the 2016 recipient for the Fellowship Merit Award in Poetry from the Rhode Island State Council on the Arts. She lives outside of Providence with her husband and their three children.

There’s a lot to cheer about in Corsicana