Koolhaas, whose name is synonymous with modernity and the urban condition, said he chose to move his focus away from cities as the “massive neglect of the countryside” had made him feel a crucial element was missing from his legacy, which he hopes to rectify with the Guggenheim exhibition.

“We decided to focus on the 98% of the Earth’s surface that is not occupied by cities,” said Koolhaas in an interview. “At a certain point, the UN declared that half of mankind is now living in cities, since when there has been an avalanche of books and biennales talking only about cities. As a result, there is an enormous deficit in understanding what is happening in the countryside, which is where the truly radical changes are taking place.”

One could not imagine a better venue than the Frank Lloyd-Wright designed Guggenheim museum for the design savant to put up a show of this scale and ambition. Koolhaas’ team, comprised of students from Harvard’s Graduate School of Design, where he teaches, and Samir Bantai, the head of research at his firm, have made optimal use of the structure’s unique spiral-shaped gallery. The Guggenheim was designed to resemble an ancient structure known as a ziggurat. A ziggurat has a pyramidal structure with a walking path along the exterior surface that narrows as it climbs upwards.

Wright inverted the ziggurat when he designed the Guggenheim, widening the outer walls and the passageway as the building rises to the pinnacle. 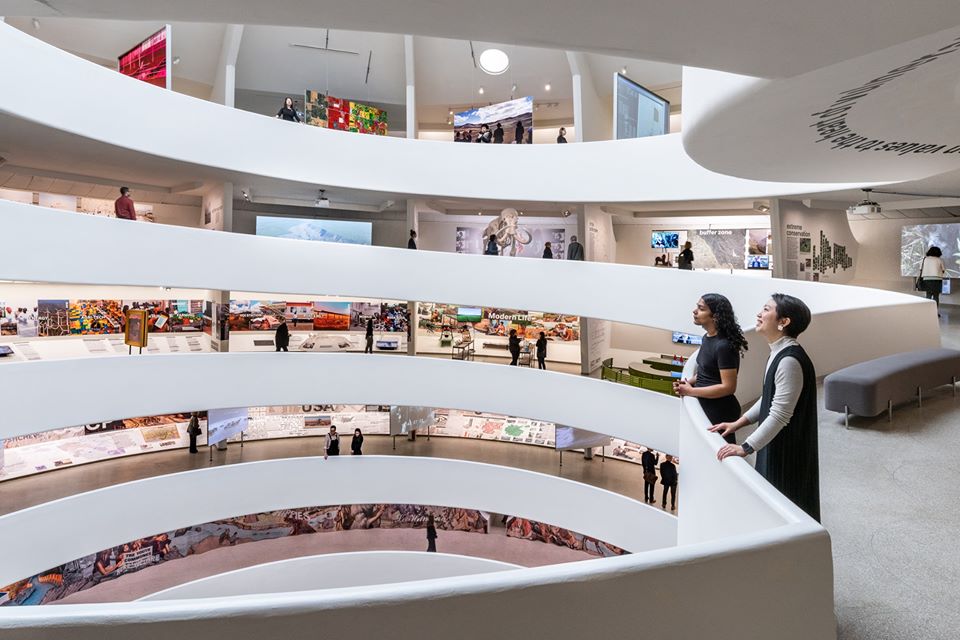 ‘Countryside, The Future’, an exhibition by Rem Koolhaas. Photo: guggenheimmuseum/Facebook

As we begin our walk up the inverted ziggurat, we are greeted with an essay embossed on a white wall about the evolving relationship between urban centres and the imagined ideal of the bucolic countryside, and the successive waves of migration from the former to the latter. We are introduced to French philosopher and utopian socialist, Charles Fourier’s attempts at reconstructing society through a network of self-sufficient micro cities in the countryside called Phalantseries. The various projects inspired by Fourier’s influential theories, including the hippie communes of the sixties and seventies, are also displayed here.

Level two, called ‘Leisure and Escapism’, is lined with a decorated curtain that traces the ideals of a spiritual life in nature as conceived by philosophers of the ancient world, up to the way that the contemporary wellness industry has commodified spirituality with holistic healing resorts, spas and new age retreats situated in exotic settings around the world, often to the detriment of the natural habitat.

The “political redesign” of the countryside is explored in eight case studies on level three that include examples of radical social engineering across the rural hinterland in the Soviet Union under Stalin, China under Mao and Libya under Gaddafi. The brutal human cost of these colossal endeavours by authoritarian regimes, however, is barely touched on.

Although the exhibit features large passages of text on the gallery walls, the experience remains “fundamentally different” to reading a book, according to Troy Conrad Therrien, the curator of Architecture at the Guggenheim. “It’s closer to an opera or a film where you have an incredibly dense playbill, or a series of subtitles as you go.”

On the fourth level, the spotlight is on China and other parts of the world as exemplars of innovative use of the hinterland. Here, Koolhaas looks at how medium to large-scale sustainable farming in high-rise structures has revolutionised the agrarian sector and the creation of rural e-commerce villages known as Taobao in partnership with Jack Ma’s Alibaba platform. “China is the only country that has an official policy on what to do with the countryside,” he says admiringly. “The state is seriously involved in maintaining the countryside but also creating new possibilities in the countryside.”

While it is fascinating to see China’s boundless entrepreneurial energy, it’s muzzling of critics and media, it’s numerous human rights travesties and brutalisation of the Uighur and Tibetan people are conspicuous by their absence.

The fifth level, called ‘Nature/Preservation’, focuses on the effects of global warming and climate change in the countryside, since that is where the climate crisis is having the maximum impact. Two world maps called ‘Half Earth’ and ‘Shared Planet’ are highlighted. They illustrate the two proposed methods to integrate the vast green belts of earth with modern cities in order to meet the carbon reduction targets of the Paris Agreement. 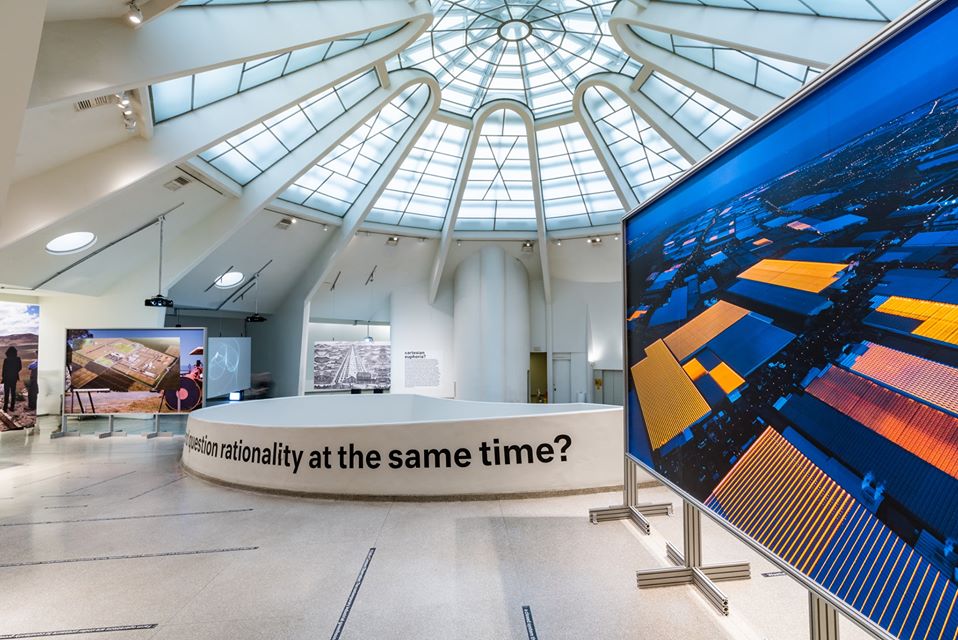 Countryside, The Future, an exhibition by Rem Koolhaas. Photo: guggenheimmuseum/Facebook

‘Half Earth’ is based on E.O. Wilson’s 2016 Manifesto. It calls for a drastic separation between an almost pristine nature on the one hand and human habitation and cultivation on the other. The second proposal puts forward a more intensive sharing/mixing of all our territories. Both approaches imply radical changes in food production, ideology and agricultural techniques.

This section also includes studies exploring the pernicious effects of climate change on the vast stretches of uninhabited land, such as the thawing of permafrost in Siberia, and the impact of major preservation efforts to save endangered wildlife species threatened by disruptions to the ecosystem and food chain.

The final floor showcases innovative new technologies that address challenges to food security such as intensive indoor farming techniques that deploy state of the art heating, lighting and artificial soil, and the growing popularity of land-based fish farming, a huge benefit for breeders as installation locations for breeding ponds need not be limited to the coastline anymore.

Although the show is an ambitious effort to address the big issues confronting our species, it often feels like a sanitised romp through the cerebral ruminations of an ivory-tower academic not used to dealing with the unordered messiness of the human experience. While there is much food for thought about how our relationship with the environment has evolved over the last few millennia, the most resonant section of the show describes how successive waves of Kurdish and African immigrants helped in revitalising the dying Calabrian towns of Raice and Camini until a crackdown by Italy’s right wing leader, Matteo Salvini, put a damper on it.

This sense of detachment from the human experience is not by accident but design, as we find out in an essay by Koolhaas in the exhibition catalog, praising what he calls the “post-human” architecture he encountered at Tahoe Reno Industrial Center (TRIC), the largest industrial park in the world, which serves as a backroom for tech giants Google, Apple, Amazon and Tesla.

“There has been no architecture of a similar vigour in the last 100 years,” he writes in an ode to the mega-structures, the largest of which spans nearly one million square kilometres. “It is based strictly on codes, algorithms, technologies, engineering and performance, not intention. Its boredom is hypnotic, its banality breathtaking.”

Koolhaas may rhapsodise about the cold efficiency of algorithm-designed structures, or even see them as the inevitable next step for humanity, but human needs and desires will always take precedence in the grand scheme. A future lacking the ineffable essence of what it means to be human is a textbook example of dystopia.

As Plato said, “Human behaviour flows from three main sources: desire, emotion, and knowledge”. Focusing on the last while ignoring the first two is a formula for disaster, one that we cannot afford.

Vikram Zutshi is a cultural critic, author and filmmaker.