The landscape and skyline of Buffalo have certainly changed in recent years, with a host of new real estate development projects that have added to the downtown core, the Buffalo Niagara Medical Campus, and even some other parts of the city.

While LECOM Harborcenter, 250 Delaware, 500 Pearl, the new Oishei Children’s Hospital and University at Buffalo’s new Jacobs School of Medicine and Biomedical Sciences have grabbed the attention, it’s the smaller renovations of existing, historic buildings that are transforming Buffalo’s industrial past into a residential future.

Here are just a few of the “Renovators” that have been active in Buffalo. 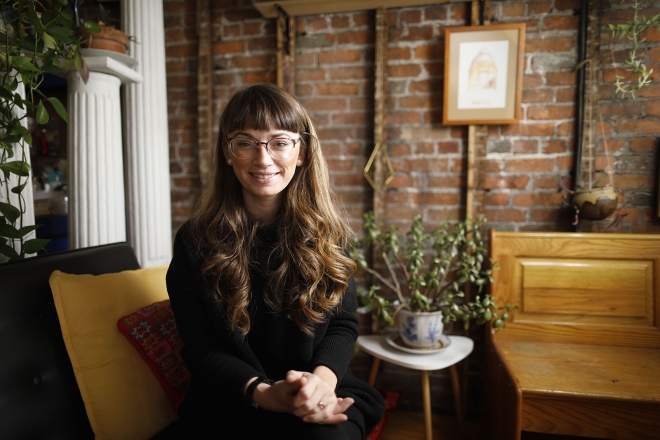 Bernice Radle is CEO and founder of Buffalove Development, Buffalove Management and Little Wheel Restoration Co., as well as vice chair of the Buffalo Zoning Board of Appeals. (Derek Gee/Buffalo News)

Bernice Radle is a Niagara Falls native who found her passion and home in Buffalo’s preservationist community, and quickly made her presence known by calling attention to Buffalo’s historic homes and buildings, and then working to restore them. Her efforts and enthusiasm landed her publicity, consulting opportunities and speaking engagements, and a position as vice chair of Buffalo’s Zoning Board of Appeals.

The firm renovated 585 Niagara St. into affordable apartments in late 2016, and then moved its headquarters to the building. Radle is currently working on a historic rehab of 588 Niagara – a three-story red brick building across the street – and teamed up with Jason Yots and several other investors to purchase and renovate the former Record Theatre at 1786 Main. 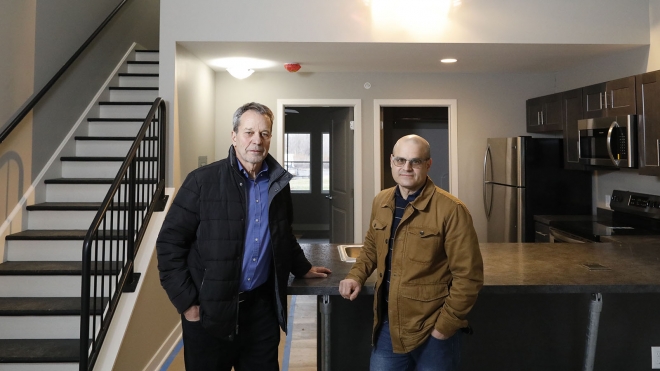 Architect Karl Frizlen and preservationist Jason Yots have become yet another development duo, with more than one joint project under their belt.

Frizlen, an architect, has been engaging in development in recent years, specializing in urban restoration, property development and “green architecture.”

His Frizlen Group has completed an array of projects in Buffalo, including several former Catholic schools-turned-apartment buildings in North and South Buffalo, the conversion of the former Annunciation School at 257 Lafayette Ave. into a mixed-use building, and the conversion of 305 Utica St. in the Elmwood Village into a two-building residential complex.

Yots is a historic preservation and adaptive reuse expert, consultant and architect, whose Preservation Studios is an architectural, design and historic rehab consulting firm that works on preservation and tax-credit projects. A veteran tax credit and community development attorney, Yots also began engaging in development through a separate company called Common Bond Real Estate, which he formed in 2014.

The duo began teaming up, starting with the former Otis Bed Co. building on Florida Street, which is now the Mattress Factory Lofts, with 34 apartments and the new headquarters for Yots’ firms. They are also spending $10 million to convert the former New York Central Freight House at 68 Tonawanda St. into the Black Rock Freight House apartments, with 35 units. And they are pursuing a $30 million renovation of the former Barcalo Manufacturing Co. building at 175-245 Louisiana St. into 119 loft apartments and offices. 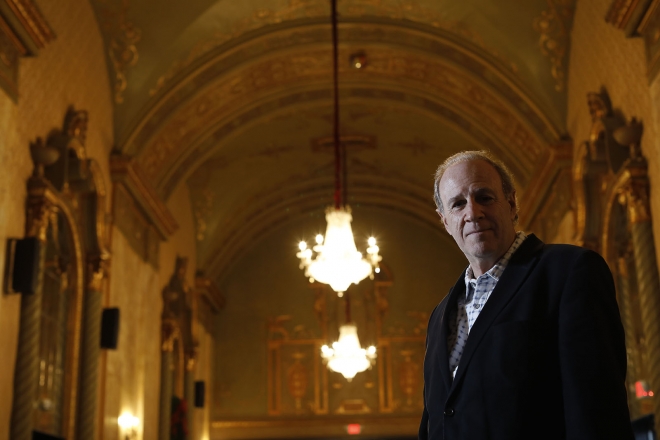 Jake Schneider in the grand lobby of Shea’s Seneca, the former theater at Seneca and Cazenovia that he brought back to life as a banquet center and the Skyroom Lofts. (Derek Gee/Buffalo News)

Like Frizlen, Jake Schneider is also a veteran architect who has increasingly become active in the development scene in Buffalo. He has spent 30 years in architecture, since 1979, after obtaining his degree from the University of Notre Dame. The son of an architect with a long legacy in Buffalo, Schneider has specialized in educational and religious design and adaptive reuse of historic structures.

In 2003, he started his development business, and has picked up the pace in the last eight years or so, revitalizing over 400,000 square feet of mixed-use space in formerly empty buildings.

He developed the former Seneca Paper Co. building on Ellicott Street into the 30-unit Historic Warehouse Lofts in 2008. He bought the former Alling & Cory paper company site on North Division Street in 2009, and turned it into the AC Lofts. And he converted a former confectionery and warehouse building into the 50-unit Apartments at the Hub on Swan Street in 2014. 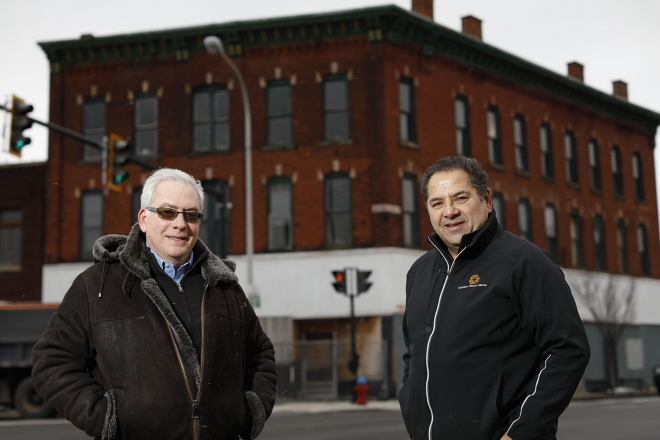 Roger Trettel of Revival Development, left, and Steven Carmina of Carmina Wood Morris stand in front of the buildings where they are developing the Nash Lofts. (Derek Gee/Buffalo News)

Steve Carmina and Roger Trettel have independently made names for themselves working on redevelopment projects in Buffalo, although they come from different perspectives.

Carmina is the president of architectural and engineering firm Carmina Wood Morris PC, which works on an array of commercial, medical and housing projects but has cultivated a reputation for designing historic renovation and adaptive reuse jobs for local developers.

Carmina has also become involved in actual development. He bought and renovated what is now the architect firm’s headquarters at 487 Main St., and he lives there, too.

Trettel – an environmental and ecological consultant who is vice president of energy services for Tetra Tech – has spent 25 years advising on oil and gas pipeline, renewable energy, restoration ecology and site development. But he’s also made a successful side career over the past 23 years in real estate development in Buffalo and Maine.

The owner of J.R. Trettel Developments and Revival Development has completed over $30 million in projects – including 523 Main and 500 Washington streets, the Buehl Block at Ellicott Street and Broadway, 285 Ellicott, 515 Main, 5-7 Genesee St., 301 Ellicott and 133 S. Division St., all in downtown Buffalo.

Carmina and Trettel are teaming up for their latest venture, the Nash Lofts at Michigan and Broadway. 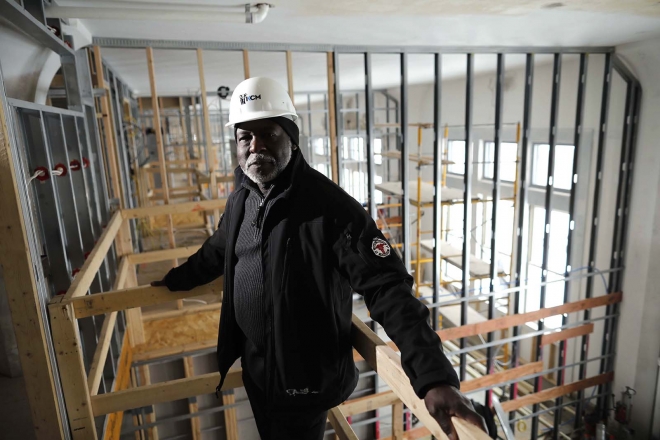 Dr. Greg Daniel, an emergency medical doctor-turned-entrepreneur, is one of the newest entrants to the region’s development scene. The native of Trinidad – who earned his bachelor’s and medical degrees at University of Wisconsin, and is licensed in eight states – served as a flight surgeon in the U.S. Air Force Reserve, and spent the first part of his career as a doctor.

But his itch for business took him in a different direction, and in 2000 he founded the Exigence Group, which became an umbrella corporation for 40 businesses ranging from emergency medicine management and staffing to urgent care centers.

Exigence operated eight Immediate Care clinics in Buffalo, Rochester and Austin, Texas, and provided care to about 500,000 patients a year through the clinics, the emergency departments that it staffed and three hospital medicine programs. Daniel sold it in 2012 to TeamHealth, and then turned his attention to real estate and other ventures through Nidus Development.

Daniel initially focused on free-standing medical, office and mixed-use space, but is now pushing into adaptive reuse. He paid $4.3 million to buy the former Pierce-Arrow Administration Building that fronts on Elmwood Avenue in North Buffalo, and is partnering with the building’s longtime former owner in a $30 million project to bring 105 luxury loft apartments and a 100-seat restaurant and event center to the vacant three-story brick structure. 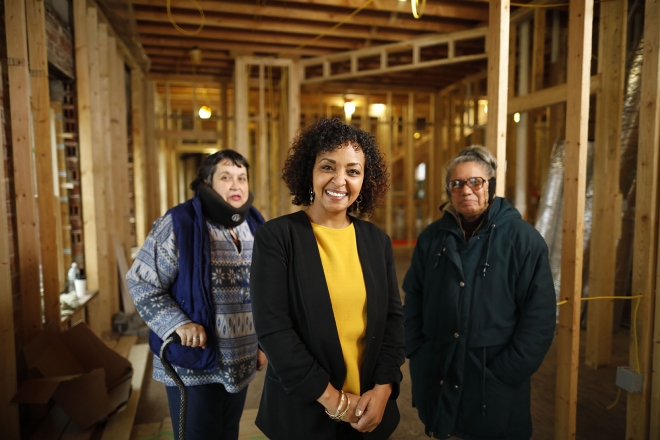 Rahwa Ghirmatzion leads PUSH Buffalo, a community activist organization that grew up on Buffalo’s West Side by agitating for changes to benefit the lower-income, ethnically diverse neighborhood. Originally focused on sustainable housing, the group has since progressed into renovating homes and now commercial buildings.

Most recently, PUSH turned the former School 77 into senior apartments, and it’s now renovating the WASH Project at 417 Massachusetts Ave. into nine affordable apartments and an arts and cultural center.

Ghirmatzion was a refugee from the civil war in Eritrea when she came to the United States as a child with her family, and arrived on Buffalo’s West Side. Her history of activism started early, when she led 11 classmates on a hunger strike in the seventh grade to force her public school to restore reusable plastic trays instead of styrofoam, and to rehire a dishwasher who had lost his job.

After college, she spent more than 15 years working with community organizations, starting with Ujima Theatre Company, where she began as a volunteer and rose to become executive director. She later landed at PUSH, where she took over the helm from founder Aaron Bartley.

She now oversees the organization’s programs and operations, which include housing construction, solar installation, job training and a youth center, in addition to advocacy efforts. PUSH employs 40, and has renovated more than 100 homes in the past seven years.

Nailing It Down: Keys to hiring a great contractor

Design of the times as all roads lead to creative Cork