One of LA’s most beloved sites is the La Brea Tar Pits, consisting of a park, pools of asphalt in which are trapped fiberglass mammoths; and the 1977 George C. Page Museum, embedded in a raised mound, or berm, that children love to roll down.

The 1970s-era Modernist museum, filled with dioramas of ancient beasts eating each other as well as an internal garden, has plenty of quirky charm. So does the surrounding park with its patches of bubbling asphalt that have delighted visiting schoolchildren for decades.

However, the museum is felt to be somewhat out-of-sight and outmoded in its presentations; and the park is rambling and confusing, challenges that might intensify when LACMA embarks on its anticipated reconstruction. 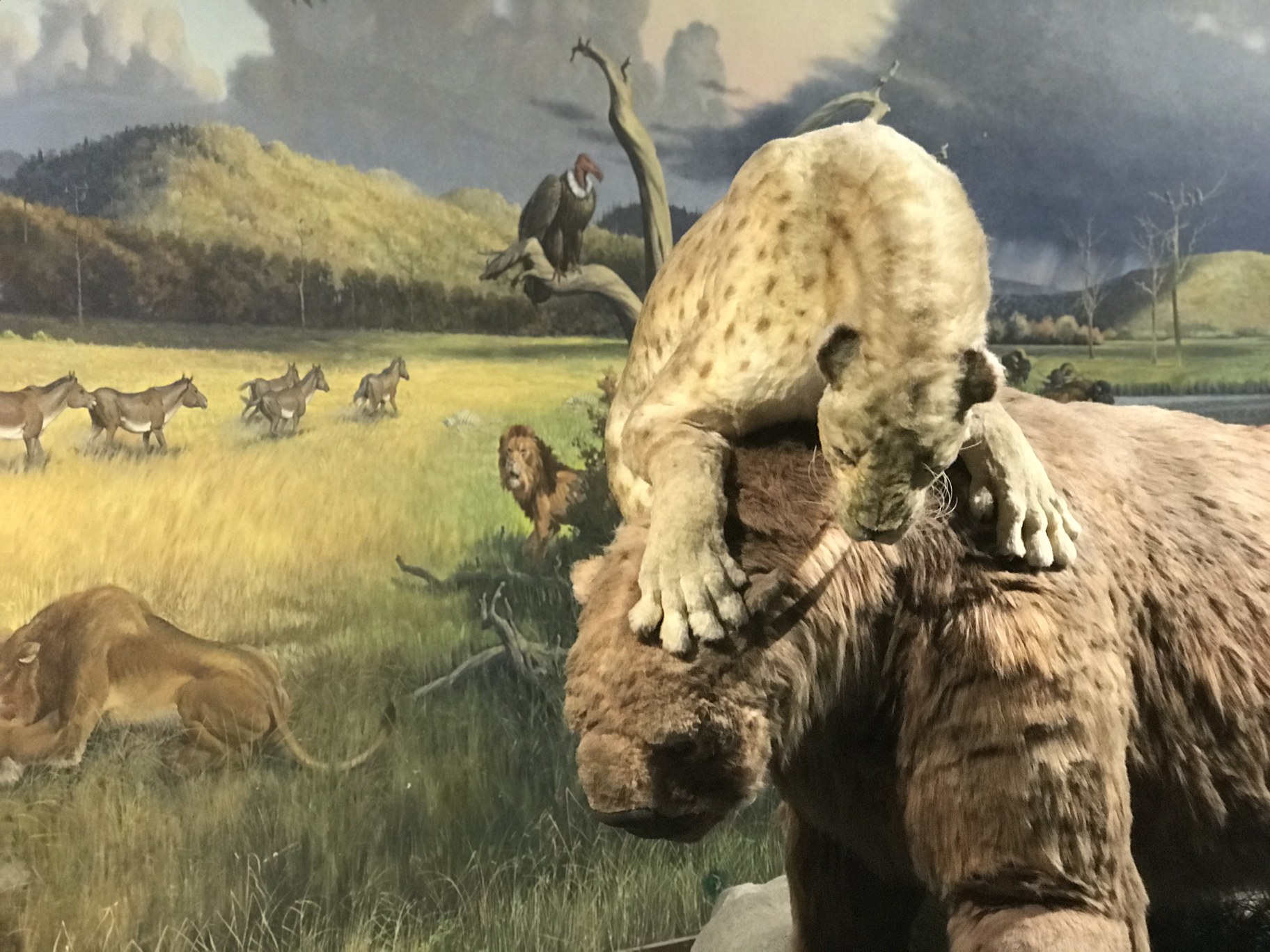 So the Natural History Museums of Los Angeles County has been seeking a design team to give the destination a makeover.

A shortlist of three — Dorte Mandrup of Denmark; and Weiss/Manfredi and Diller Scofidio + Renfro of New York — presented “approaches” to the public a few months back. Angelenos and the jury united around Weiss/Manfredi, who offered up a conceptual approach called “La Brea Loops and Lenses.”

Weiss/Manfredi plan to largely maintain the museum and its sloping berm while cutting into the slope to allow views in. And they would leave the theatrical mammoths in their current sticky home.

They would add another building for new artifacts and reorient the park into three leaf-shaped grassy areas interconnected by looping paths, and add an entrance from Wilshire Boulevard at the southwest corner. 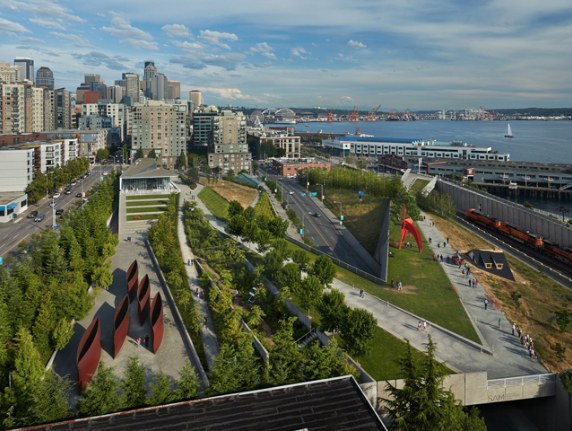 Weiss/Manfredi’s past projects include the highly acclaimed Seattle Olympic Sculpture Park, which connects an art museum and city buildings to the waterfront via a zigzagging path and sloping lawns. The firm works at the intersection of architecture, infrastructure and landscape. This combination appealed to the Natural History Museums.

Lori Bettison-Varga, head of The Natural History Museums of LA County, told DnA that the team they put together is “composed of people that are deeply connected to the site and that appreciate it, not just as a uniquely Los Angeles location, but as a uniquely world location… and what it can tell us about today’s ecological and climate situation.”

DnA met up with Bettison-Varga, Marion Weiss and Michael Manfredi to find out more about what changes they plan, how they will maintain the “thereness” and “spectacle” of the quirky site while making the experience clearer and more accessible. We also learned how all this fits in with the changes coming to LACMA; and how they plan to pay for it all. 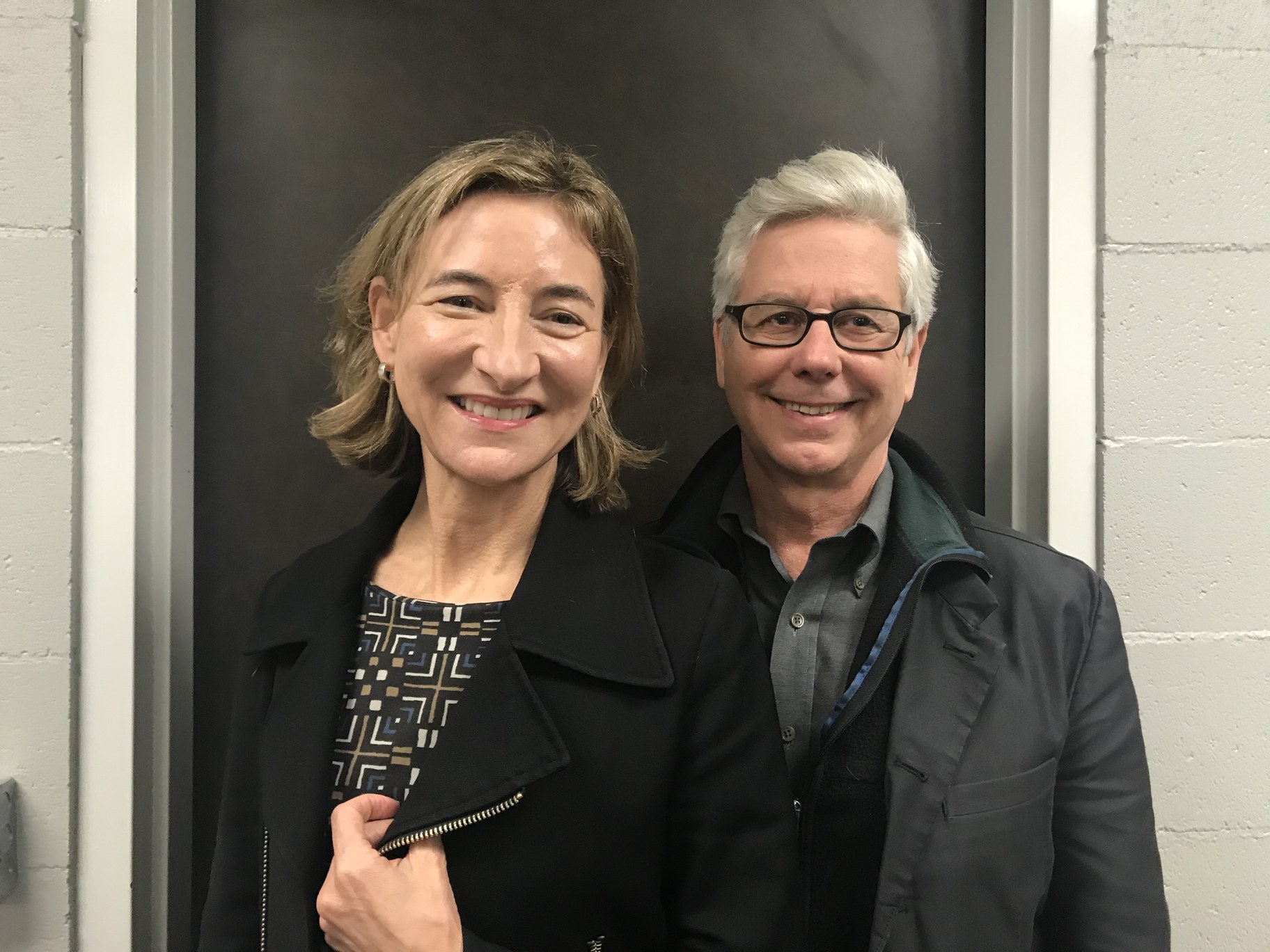 “All along, the integration of the landscape architecture and the actual building and the Page Museum was really critical to us,” said Bettison-Varga. The architecture team has “captured the research area, the community space, the pop culture, the wonderful mammoths and mastodons and brought that to life and really tied that landscape together with the actual museum itself.”

Bettison-Varga says that there are plenty of things left to figure out, like whether a new building will be added, and where the funding will come from. She expects the cost of construction will be shouldered by state and federal sources as well as private foundations.

Weiss has called the tar pits redesign the project of a lifetime. She sees their role as integrating both architecture and landscape, and using storytelling and “spectacle,” akin to Disneyland, to inform visitors about climate change.

“It becomes a petri dish of everything that’s iconic about the quirky theatricality and fictional worlds of L.A., the very thereness for the community and then the kind of far reaching role that it has in introducing the world to crucially important environmental questions,” she said.

The architects see a role for both imposing order in a chaotic landscape, while maintaining the odd eccentricities of the site.

“I think given the urban site, there’s always going to be a level of improbability and surprise,” Manfredi said. “And that sort of play between the improvised and the controlled, the spontaneous and the programmed is, I think, what we really want to try to achieve in our design.” 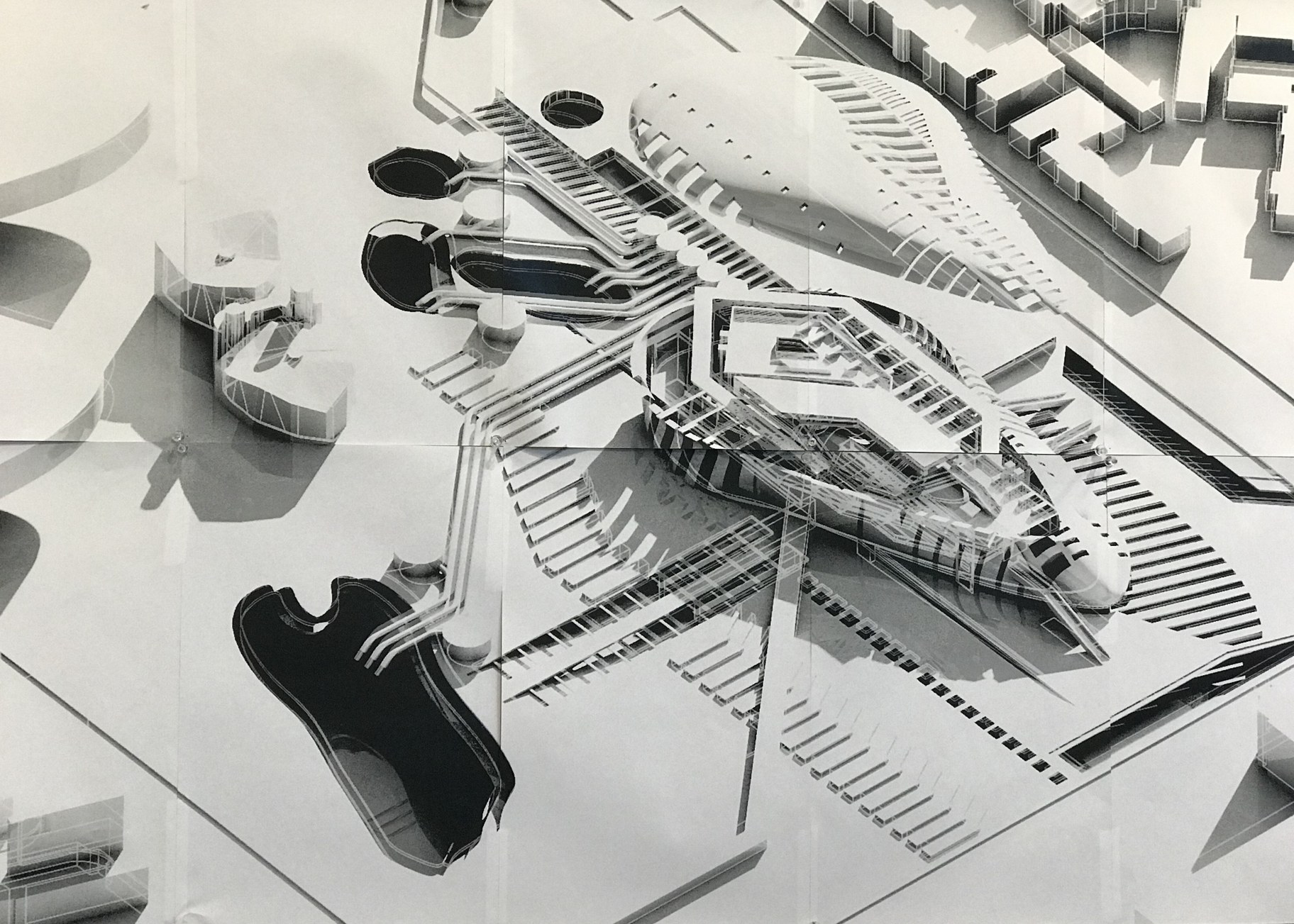 The quest for a designer for the La Brea Tar Pits has attracted national attention, even from design schools.

DnA recently attended the presentation of projects by students at Ohio State University’s Austin E. Knowlton School of Architecture. They were asked to rethink the tar pits and came up with some surprising solutions. 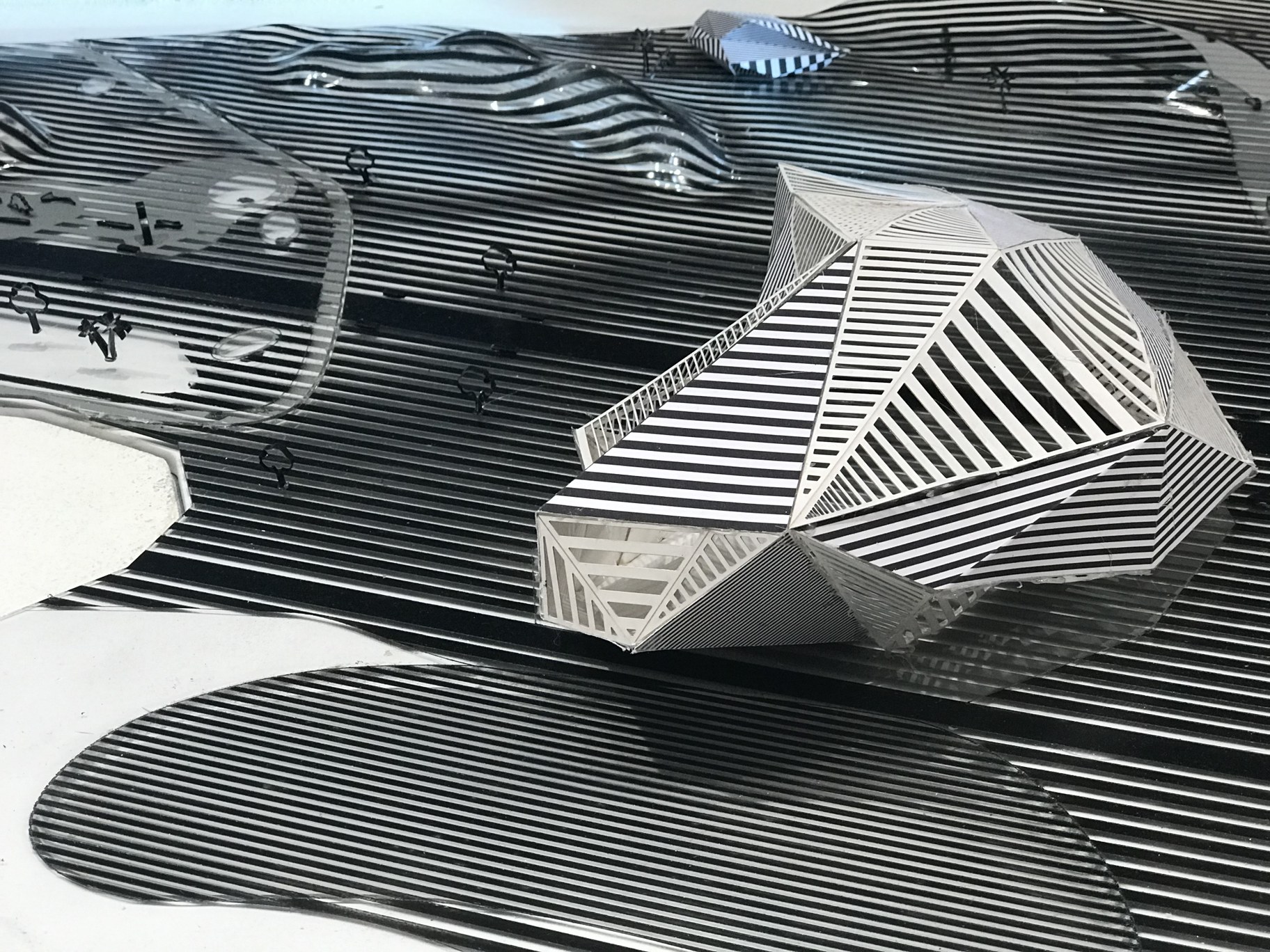 OSU’s Marly McNeal and Emma McMonigal transform the museum and the park into a patterned artwork in which the dark stripe is the tar. Photo by Frances Anderton/KCRW

One team proposed a pop-up giant machine piping oil from the tar pools, that would critique capitalism and extraction of resources.

Another offered up an artful remake of the museum into a faceted rock of a building whose faces of striped asphalt and concrete stripes would blend into a landscape of tar and grass.