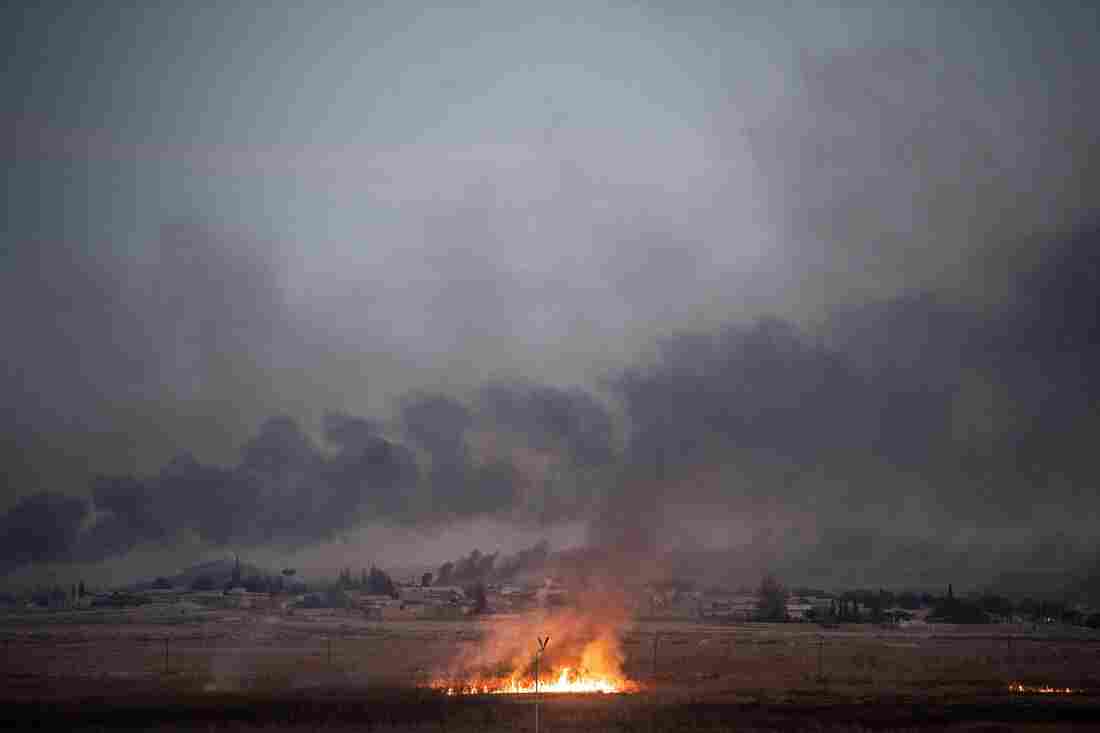 Smoke rises from the Syrian town of Tal Abyad,on Oct. 10, 2019 on the second day of Turkey’s military operation against Kurdish forces. President Trump’s decision to pull back U.S. forces from the area has been viewed as giving Turkey a green light for the operation and opened him up to condemnation from within the GOP. 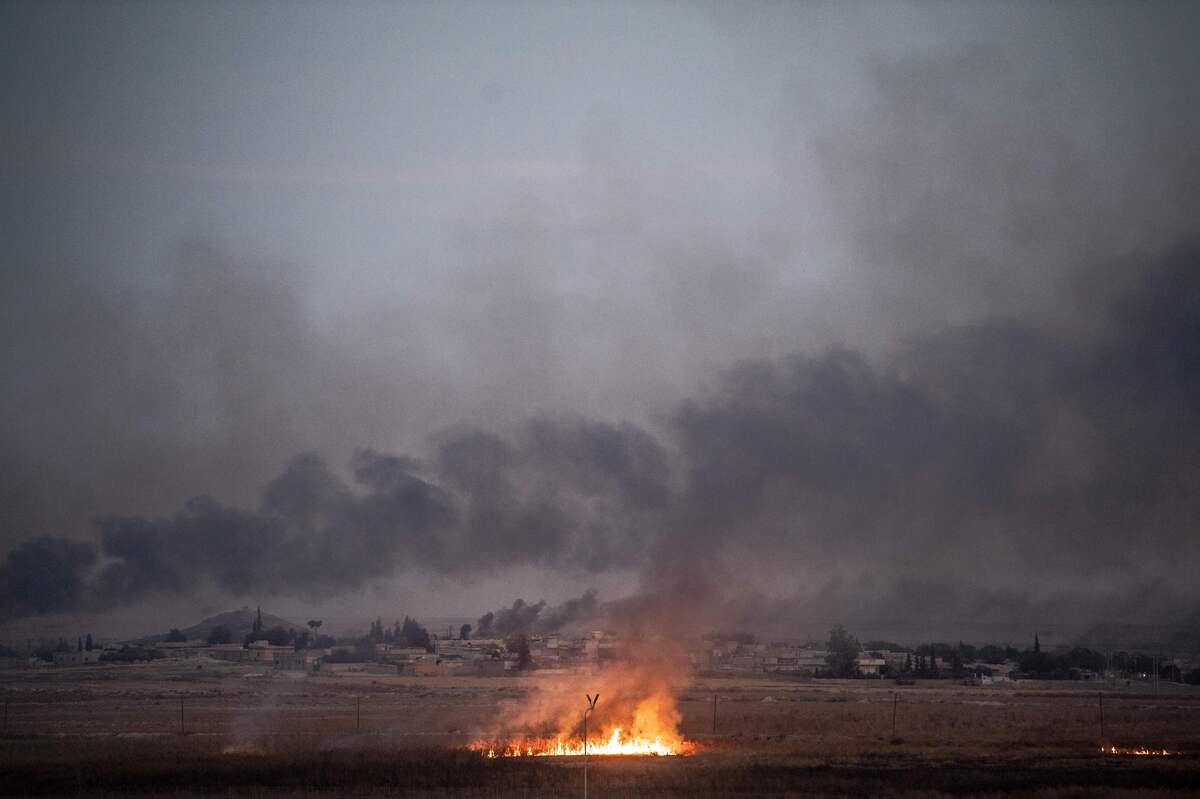 Smoke rises from the Syrian town of Tal Abyad,on Oct. 10, 2019 on the second day of Turkey’s military operation against Kurdish forces. President Trump’s decision to pull back U.S. forces from the area has been viewed as giving Turkey a green light for the operation and opened him up to condemnation from within the GOP.

The growing divide between President Trump and many of his fellow Republicans over his decision to move U.S. troops in Syria out of the way of a Turkish incursion threatens his delicate alliance with the congressional GOP at a time when he needs their support more than ever, party strategists say.

Some of Trump’s closest allies, however, say the division may ultimately help him with an impeachment fight.

“No president likes to have his own party argue with him,” said former House Speaker Newt Gingrich, who’s also an informal Trump adviser. He said Republicans have legitimate concerns with Trump about the decision, including the lack of advance notice.

But by disagreeing with Trump over Syria, “they’re proving they are independent” of him, said Gingrich. “They’re proving that they’re not automatically going to do what Trump wants,” said Gingrich, who led the 1998 investigation to impeach former President Bill Clinton.

On Wednesday, Turkey launched airstrikes against allied Kurdish fighters in northern Syria just days after Trump said he would remove U.S. troops from the immediate area. Trump justified the decision by arguing it was time to end the United States’ involvement in “endless wars.”

“The worst mistake that the United States has ever made in my opinion was going into the Middle East,” Trump said.

Loyal allies like Sen. Lindsey Graham, R-S.C., blasted Trump’s decision and said it “will be the biggest mistake of his presidency” if not reversed.

At least one Republican went a step further with his criticism of Trump.

Illinois Rep. John Shimkus, who is retiring from Congress, called the president’s decision to leave Syrian Kurds to fend for themselves “terrible and despicable.”

“In fact, I called my chief of staff in D.C. I said pull my name off the ‘I support Donald Trump list.’ I mean, we have just stabbed our allies in the back,” he told local radio station KMOX.

Trump’s decision has also been criticized by many evangelical pastors, who are often among his strongest allies.

Trump’s differences with the GOP over foreign policy are not necessarily new although this chasm comes at a time when he’s seeking support from the public and congressional Republicans as the House impeachment inquiry gains steam.

“That is now being exaggerated at the worst possible moment for him,” said Alex Conant, former communications director for Sen. Marco Rubio’s 2016 presidential campaign. “He’s now facing two battles one with House Democrats on the impeachment issue and the other with Senate Republicans on the Syria issue. Both are full-time jobs. And neither leaves him much room to maneuver.”

Former Sen. Jeff Flake, R-Ariz., who chose not to seek re-election last year, said the Senate is unlikely to entirely turn on Trump but added the divisions reflect the lack of respect between the two ends of Pennsylvania Avenue.

“There’s a lot of fear of the president and his control of the base. But there’s not a lot of love lost,” said Flake, who has been one of the few outspoken critics of Trump in the Republican party. “This will be another reminder as to why it wouldn’t be too bad if the president were to not be president.”

During a stop in his district on Wednesday, Idaho Sen. Jim Risch tried to avoid Trump’s increasing controversies while participating in a forum organized by the National Women’s Business Council.

Risch, who is chairman of the Senate Committee on Foreign Relations, abruptly ended an interview with Boise State Public Radio when asked about Syria and Ukraine.

“I’m not going there. If you want to have an interview with me about the business center, please do so,” Risch said, before walking away. “Don’t do that again.”

Trump’s decision on Syria should not be a complete shock. He called for a complete withdrawal from Syria in December before reversing himself amid a similar backlash from Congress and military leaders.

Republicans are very aware of his campaign promise to withdraw troops from the Middle East.

Nonetheless, he faced a barrage of criticism from once loyal defenders, including Graham and Rep. Liz Cheney of Wyoming, who called the withdrawal “a catastrophic mistake.”

On Thursday, Cheney and most of the House GOP leadership introduced a bill that would impose sanctions on Turkey for launching the offensive.

One of Trump’s few Capitol Hill allies on the issue is Sen. Rand Paul of Kentucky, who accused Graham and Cheney of being part of a “neocon War Caucus.”

I know this @realDonaldTrump is the first President in my lifetime to understand what is our national interest and what is not. He is stopping the endless wars and we will be stronger as a result. The Cheney/Graham Neocon War Caucus has cost us too much fighting endless wars.

Republican strategist Ryan Williams warned the divisions are not something Trump should take lightly. Some of his biggest supporters see the impeachment inquiry as a threat to his presidency.

“There should be a completely unified party trying to push back against the Democrats’ attacks and the onslaught from the House,” said Williams, who served as spokesman for now-Sen. Mitt Romney, R-Utah, when he ran for president in 2012. “And this is a major distraction. They have to now focus on defending the president at the same time criticizing him on a rash foreign policy decision that was made really at just the drop of a hat.”