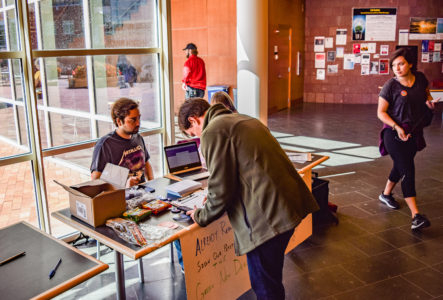 Many of the most high-profile Democratic presidential primary candidates have a presence on Grinnell’s campus.

Rebecca Fox ’23 leads Students for Kamala and works to “mobilize the student body and community to help get Kamala [Harris] elected as our next president” through “attending both county and campus Democrats meetings, as well as actively tabling, phone banking, and canvassing throughout the community,” she said.

Though Harris has not visited Grinnell, Fox says the organization has hosted other events, such as a virtual town hall with Harris. Students for Kamala encourages interested students to attend their regular meetings on Wednesday evenings, for which “the specific times and locations are always posted at least several days in advance on the college events calendar, Facebook pages and in emails.”

Aris Reyes ’23, along with three other students, leads Grinnell Students for Joe Biden. Though they ultimately work to support Biden’s candidacy, they also emphasized their goal to “provide youth voters the option to discuss our current political climate” as well as to “have a discussion on what we can do in this next upcoming election.”

The group engages with the community through “door knocking, phone banks, bi-weekly meetings, and tabling twice a week,” and encourages students who are interested in getting involved to attend their first general meeting on Monday, Oct. 14 at 7 p.m. or to talk to them while they table every Tuesday between 11 a.m. and noon.

Paige Oamek ’21 spoke on behalf of Students for Bernie Sanders, though she emphasized the group’s “horizontal structure” without official leaders that allows students to take up any role within the organization.

Oamek describes relational organizing as “just talking to a friend or someone you might know about how Medicare for All will change their life,” and says that this personal element helps “people realize their stake in movement politics.”

In addition to these candidate-based groups, several organizations engage through advocating for specific issues or just general involvement with politics, including Sunrise Movement Grinnell Hub, Free College for All and the Campus Democrats.

Free College for All works with students across the state at public and private universities, as well as Iowa Citizens for Community Improvement, says student leader Sara Castro ’21.

Their goals are to reform the multi-year tuition model at the three public universities overseen by the Iowa Board of Regents, as well as to “build power around these issues and hold politicians accountable to young people and students.”

Though they do not have regular meetings, Castro encourages students to email [studentaction] or [castrosa] to get information on upcoming events and ways to get involved.

Nat Jordan ’21 is one of the co-leaders of Campus Democrats. He said, “Historically, Grinnell students don’t vote as much as our peer students.”

The group is working to change that. Jordan said they “try to make politics exciting by promoting the caucuses and the candidates involved in them,” and work to “get students engaged in the progressive political process, whether that be through voting, volunteering, organizing, attending events or even just registering to vote.”