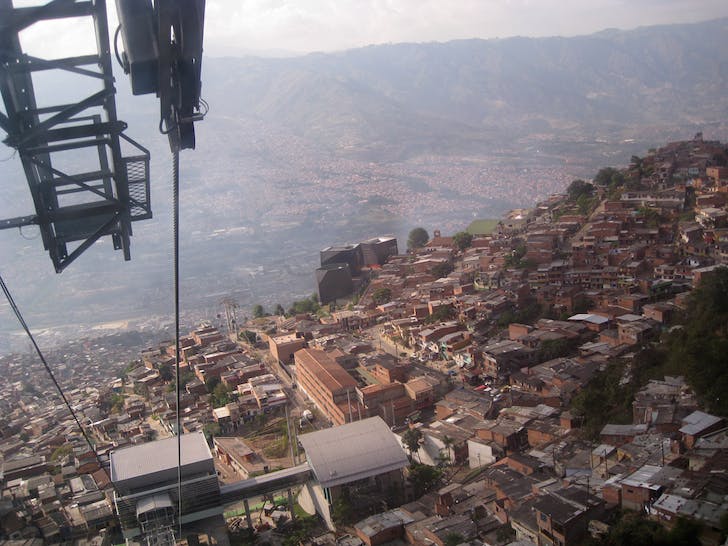 The John K. Branner Traveling Fellowship,
awarded each year to three masters of architecture students in their
final year at the University of California, Berkeley, gives recipients
the opportunity to travel the world for twelve months in pursuit of
architectural inquiries that will later inform their theses. This
fellowship represents one of the most extensive pre-thesis travel
research grants awarded to master level students in the United States.
The 2010 Branner Fellows, Adriana Navarro-Sertich, Eleanor Pries, and
Melissa Smith have just returned from their travel and are in the midst
of thesis production.

Social and cultural responsibility is returning to the forefront of
contemporary architecture. Although architects and planners have
addressed informal settlements, or favelas, for over sixty years,
it is only recently that there has been a shift in the paradigm.
Initially consisting of eradication and relocation, self-help and public
housing strategies, “slum upgrading” 1 has evolved to encompass strategies usually characterized as urban acupuncture,
aiming to minimize displacement while at the same time attempting to
better the conditions in the area. We are now witnessing spectacular
libraries in depressed neighborhoods, cable car systems in marginalized
areas, and museums in informal settlements. Following the long history
of tabula rasa schemes, and based on the foundation of Team 10 and urban
theorists and practitioners such as Castells, Perlman, and Turner, favelas
are no longer being vilified and viewed as cancers to cities and
society. Quite the opposite, through interventions that acknowledge and
legitimize informality’s architectural and urban potentials, designers
have begun to adopt the favela as a new paradigm, a paradigm I am calling Favela Chic. With design as a central component in configuring, Favela Chic interventions have accepted the notion “slums of hope,” 2
viewing informal settlements as integral components in the growth and
development of the city, and thus reformulating the discourse of the
growing city, its configuration of built form and social activities, and
the relations between the global and informal.

Seeking to minimize displacement while at the same time integrate the favela
with the city, current interventions acknowledge auto-construction as a
legitimate way of providing housing, and instead focus on the aspects
that are absent in the settlement: infrastructure, public space and
public equipment. Although ranging in types and scales, from small
acupunctural projects to expansively designed infrastructural networks, I
have identified seven common architectural tools based on comparative
field studies in South America (Ecuador, Colombia, Brazil, and
Venezuela): Plug-in Services, Urban Connectors, Icons, Skin+Sign, Dirty Works 3, Housing/Relocation, and Tectonic Uplift. 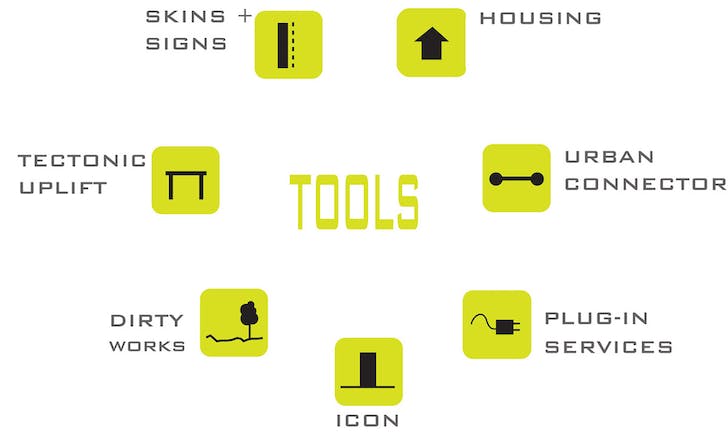 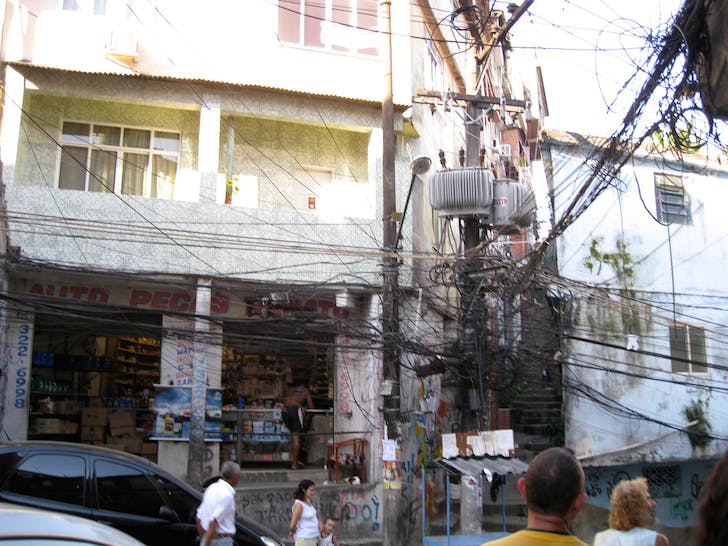 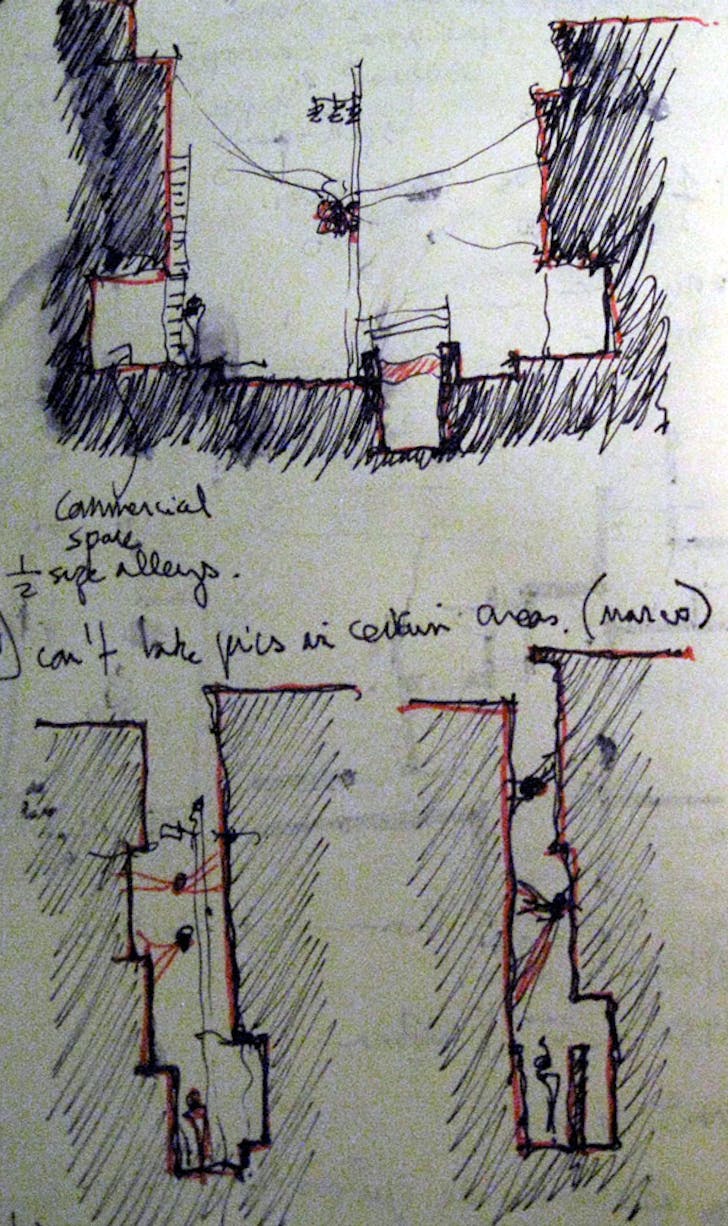 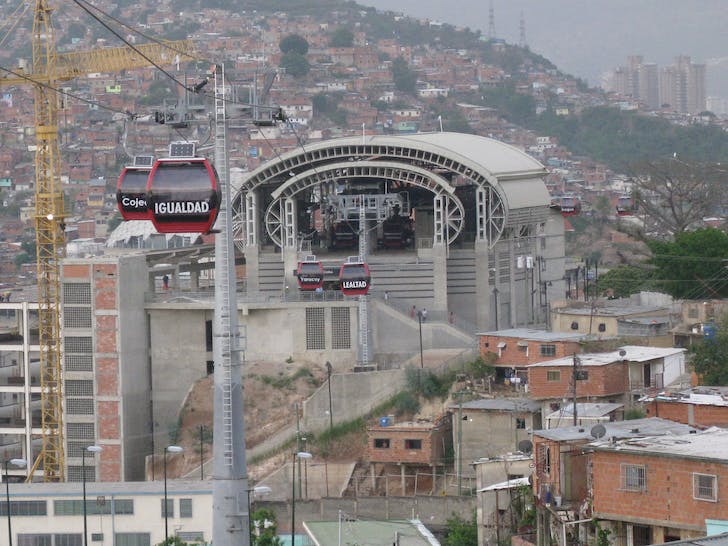 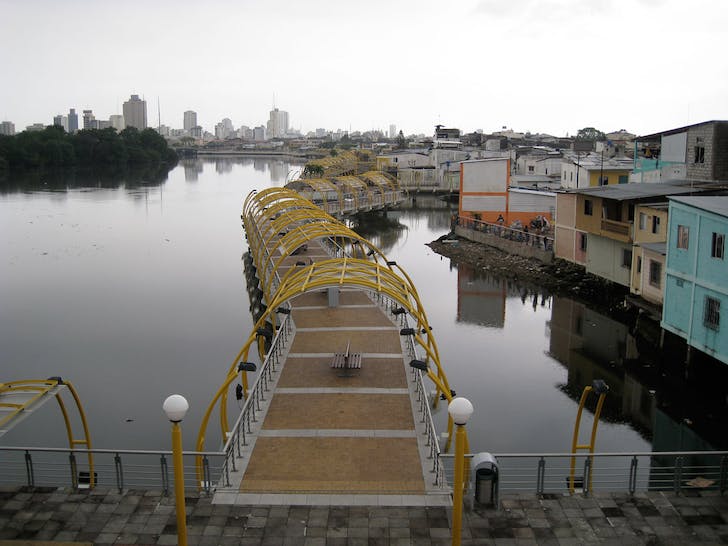 Icons/public equipment: These are formal markers and nodes within
the city (formal and informal). Consisting of mostly public programs
and interventions, this tool creates or reinforces the collective
identity of the area. Icons include museums, libraries, gymnasiums,
schools, kindergartens, and community centers. 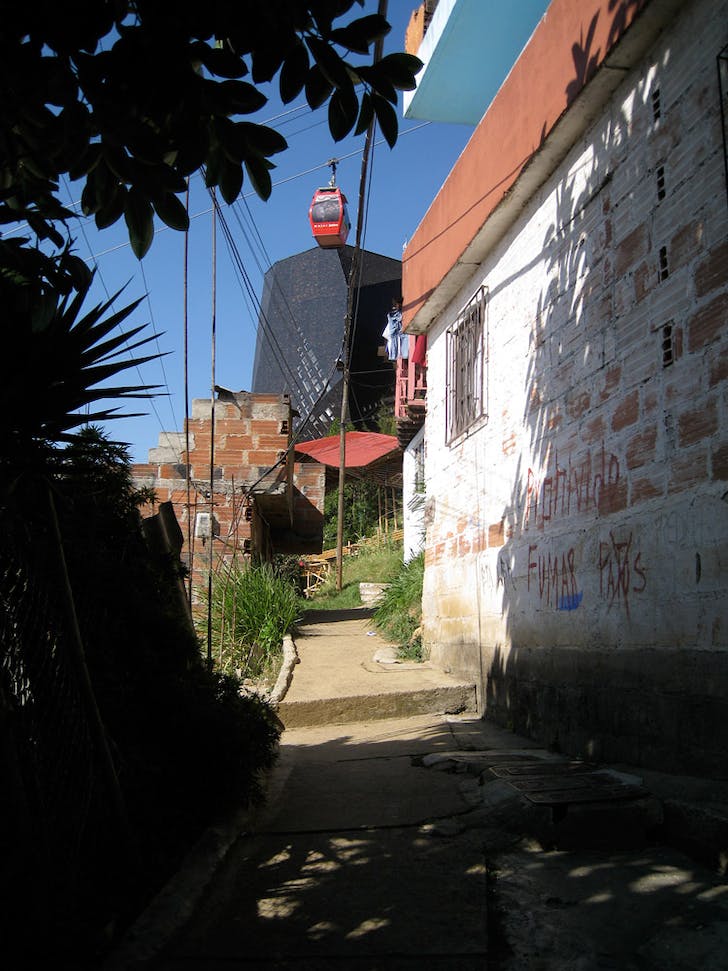 Metro Cable and Library España in Santo Domingo Savio, Medellín (Colombia). Part of Medellín’s “Urbanismo Social” (Social Urbanism), the cable car and library are part of the Proyecto Urbano Integral (Urban Integral Project) in the Northeast of the city.

Skin + Sign: Aesthetics and imagery drive this tool. Focusing on
the application of paint, ornament and imagery to the exterior of
buildings and structures Skins + Signs attempts to beautify the existing
area. 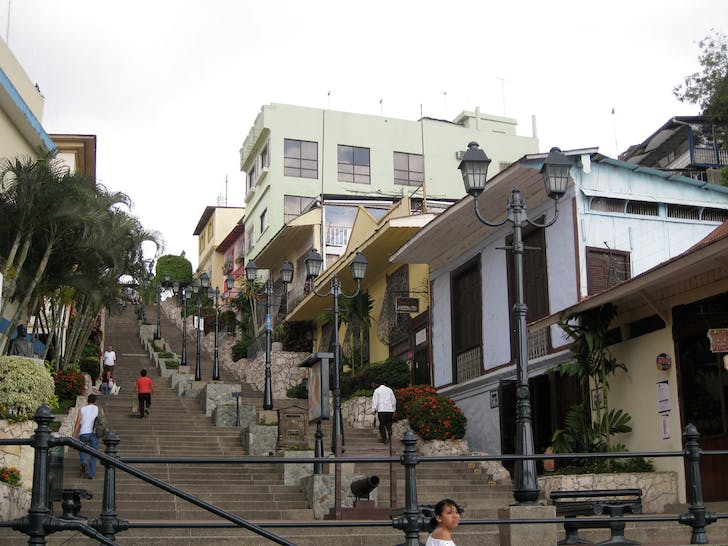 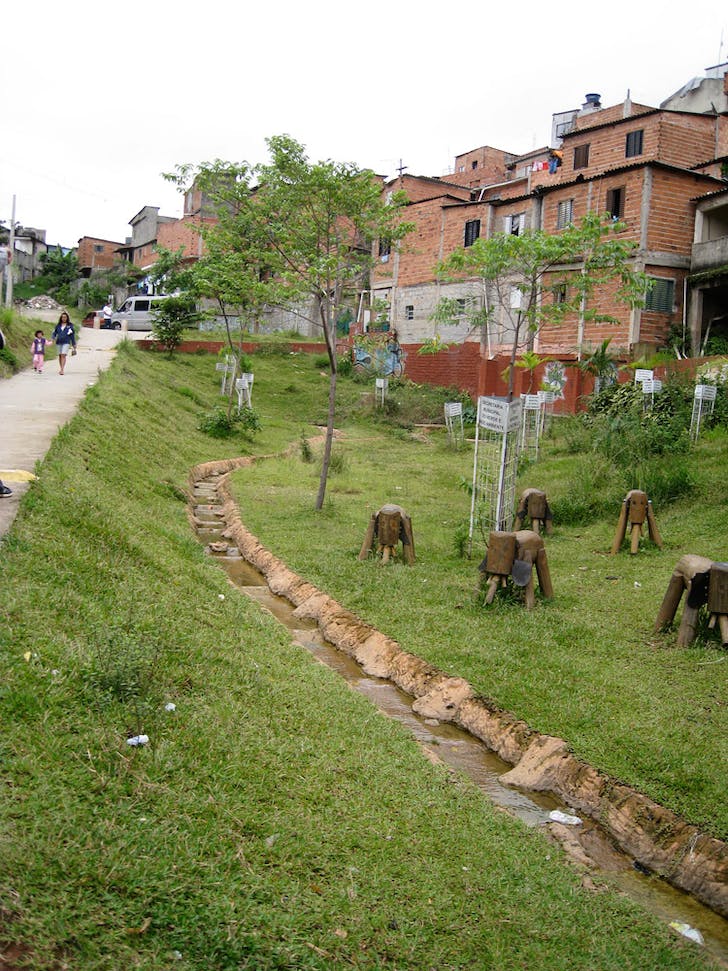 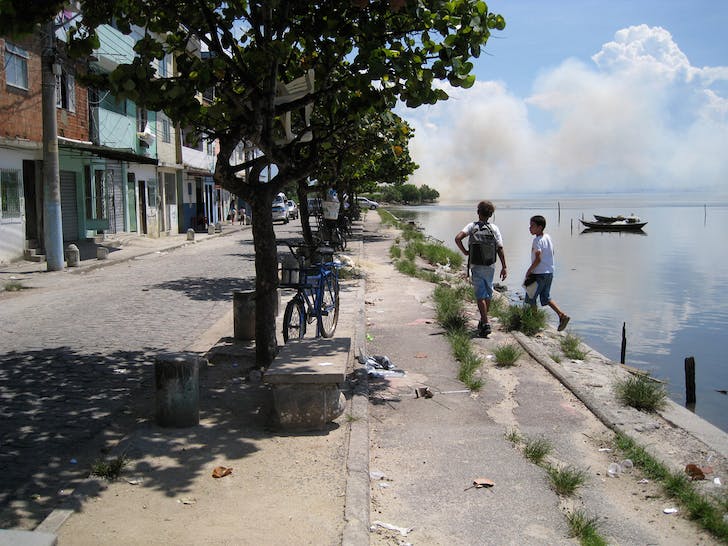 Water restoration and boardwalk construction in Parque Royal Favela, Rio de Janeiro (Brazil). This particular intervention took place during the first phases of the Favela-Bairro Program, one of the largest “slum upgrading” programs in the world.

Housing: Although Favela Chic interventions attempt to
minimize displacement, relocation is still essential, in order to
accommodate the interventions and manage risk areas. Whereas the
provision of housing is not the priority here, it remains a necessary
tool in the approach. In this regard, we primarily find mid-rise
structures, varying from in-situ and off-site projects. 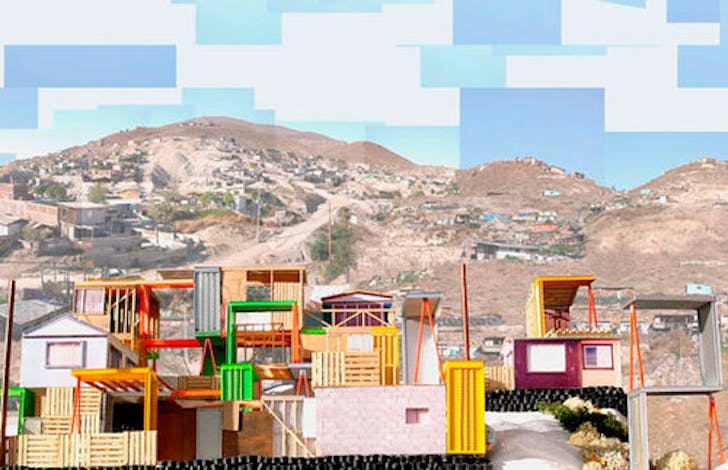 Even though many of these interventions are so recent that their real
impact is not yet discernable, conversations about key issues and
questions, as well as short- and long-term outcomes of the interventions
are critical to further the discourse and practice:

How are these interventions operating? What is the context and
framework, in which projects are planned, executed and maintained? Currently, some of the most interesting efforts to address favelas
are exemplified in Latin America. Significant reasons for this include
the political and economic dynamics taking place in the region, where
economic growth, decentralization and democratization processes have
allowed stronger local autonomy in urban development projects and
emphasized a desire to reflect citizen rights through city form. Some
key factors to acknowledge within the framework include:

Where
exactly are these interventions operating, in other words, what defines
a non-formal settlement, or informality in a specific context? The
definition of informality is extremely contextual and dependent on
place. I would argue that there is not only one type of “informality”
but various “informalities,” surpassing generalization of geography
(First and Third World, periphery and core, etc.), poverty, inequality,
illegality, marginality, isolation, nor resistance. Informality is not a
product but a process, constantly in the making, shifting and
redefining relationships (in may cases dependent and essential) with the
“formal”. 5
Contingent on this, the strategies, morphology, spatial organization,
aesthetics, structure, and uses emerge from the constraints and
limitations of the formal system, or asfalto, and as such should be
understood in parallel to it.

Will projects be received and used in the same manner in different
areas and situations? When we speak of use, we also speak of associated
socio-economic outcomes. For example, will the impact of a Metro Cable in Caracas or Medellin be the same in other places?
Cultural specificities, in addition to the politics of place with its
particular socio-economic dynamics, set up very different conditions and
value systems that are embedded within the urban fabric. Although
physical challenges might be similar from place to place, the manner in
which these challenges are addressed needs to be very specific to
context.

What defines integration and what is the real impact of these
interventions? What are the structural limitations of a purely physical
intervention? What does it mean to insert a formal intervention in a
non-formal city? Are these long-term sustainable solutions?

As the Favela Chic paradigm gains traction, we, as responsible
architects and planners, need to analyze the economic, cultural, social
and political implications of these formal physical interventions in
informal settlements, particularly as they tie into larger, global
systems. We need to understand and evaluate the impact and use value of
our strategies and interventions to avoid falling for the danger of
adopting an image of social good instead of addressing the social and
economic realities of everyday life.

1 UN Habitat, Slum Upgrading Facility. http://www.unhabitat.org/categories.asp?catid=542
A slum, as defined by the United Nations agency UN-HABITAT, is
“characterized by overcrowding, poor or informal housing, inadequate
access to safe water and sanitation, and insecurity of tenure.” The term
“slum” is too freely used as a term to group all squatter and informal
settlements. Although slums are usually informal settlements, not all
informal settlements are “slums”. In this same respect, informality is
not necessarily equivalent to squatting. This generalized definition of
“slum”, also adopted by Mike Davis in “Planet of Slums” (2006),
homogenizes and stigmatizes all non-formal shelter practices. The urban
poor now have to deal with another form of social exclusion and many of
these working and living neighborhoods, and communities, are reduced to
eviction and demolition.

2 Contrary to the recent point of view provided by Mike
Davis’ “Planet of Slums,” Perlman has long argued that urban residents
labeled as “marginal” are not in fact disenfranchised form the city but
are very much part of urban society contributing to the formal economy
and continuously striving to improve their lives. Perlman, Janice, “Six
Misconceptions about Squatter Settlements,” in Development, Journal of the Society for International –Development, l986: 4, pp. 40-44.

4 John Habraken and SAR (The Dutch Foundation for
Architectural Research) have, throughout the last three decades,
influenced the design and production of alternative forms of mass
housing. Habraken’s “supports”, deal with the infrastructure and the
provision of services- “infill”- which deals with the plan layout and
possibility for expansion, leaving room for to the accommodation and
experimentation of the dweller. Habraken, John, Supports: An Alternative to mass housing, and The Structure of the Ordinary: form and control in the built environment.

Adriana is in her fourth year of a dual Masters degree in Architecture,
and City and Regional Planning at UC Berkeley. Born and raised in
Colombia (S.A), she received a BS Arch (Honors) from the University of
Virginia in 2004. Adriana worked for Rafael Viñoly Architects in NYC, as
well as SORG, and OPX Global in Washington DC before moving to
California for her Masters degree in 2007. At the University, she has
taught entry levels studios and has been a Research Assistant for
various professors. Throughout her studies and practice, Adriana has
primarily focused on the socio-cultural aspects of design, specifically
analyzing the relationship between architecture, planning and
informality. More information on the research, cities and projects
related to Favela Chic can be found in the blog Adriana maintains: www.FAVELissues.com

Why the Garden Bridge should be built | Opinion

Sadio Mane is not a diver – Liverpool boss Jurgen Klopp